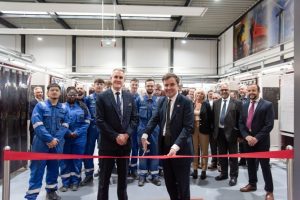 The Energy Minister, Greg Hands has opened one of three new training centres to support the Hinkley Point C project. Together with existing facilities and investment into education and skills, the centres will be ready to help local people join the additional 4,000 workers needed for the next phase of the power station’s construction.
The Minister unveiled the new Welding Centre of Excellence at Bridgwater and Taunton College’s campus in Bridgwater. The project has invested £8 million into the three new training centres, in partnership with the college.

The Welding Centre will train and qualify 500 welders a year, helping local people into work and meeting skills shortages in the South West and across Britain.
It comes as Hinkley Point C publishes its 2022 Socio-Economic Impact Report, which shows that:

The welding facility is the latest Centre of Excellence to be opened in support of the Hinkley Point C project, which has now invested a total of £24 million into education, skills, and employment support.

It joins the Electrical Centre of Excellence in Bridgwater and the Construction Skills and Innovation Centre, in Cannington. A Mechanical Centre of Excellence will open in Cannington this summer, to train students in pipefitting, steel erection and plating. Together they will support the next phase of the project, as electrical systems and major components begin to be installed.

The centres will provide new routes to people who are looking to start a career in construction, regardless of their background or skill set. New training courses have been launched, including the government’s Bootcamp scheme, T-level work experience placements and supported traineeships.

Hinkley Point C’s Managing Director, Stuart Crooks said: “The energy crisis has shown the need for Hinkley Point C’s reliable, low-carbon electricity is more urgent than ever. This report shows the project is also delivering big social and economic benefits in the communities that host us and beyond. It’s good news to see that productivity and prosperity is rising locally and we’ve worked hard to ensure that people in the region can benefit from the many job opportunities on offer in the next phase of construction.”

Andy Berry, Principle and Chief Executive of Bridgwater & Taunton College, said: “The partnership between Bridgwater & Taunton College and Hinkley Point C continues to open up new training and employment opportunities for everyone – no matter their age, background or previous skill set. The new training centres of excellence are not only making a difference to local career prospects today but will ensure Somerset has the skills needed for the next generation of net-zero projects.”