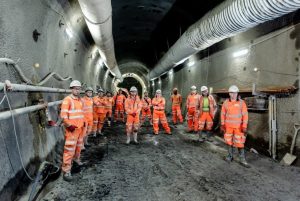 This is the conclusion of over 600 metres of tunnelling onshore at the HPC site, to form the initial excavations of the connection tunnels for the three main cooling water system tunnels to the power station; three tunnel boring machine adits under the Bristol Channel, three deep shafts and five onshore tunnels. A phenomenal achievement.

The marine works programme at HPC will see the construction of three cooling water system tunnels under the Bristol Channel using three tunnel boring machines to install concrete segment rings to line the structures. There are also five auxiliary tunnels required to be built onshore to transport the cooling water to and from the operating power station. These five tunnels are being constructed using different methodology to the three offshore tunnels; sprayed concrete lining is first carried out and followed by secondary lining utilising reinforced rebar concrete structures. All of these can be seen in the graphic below.

SCL is a highly complex element of any mining operation and takes a high level of skill and expert planning to ensure its success. This week the SCL team have broken through to complete the excavation of the longest onshore cooling water tunnel, Outfall Gallery 2.

This tunnel along with many of the other tunnels created by this team will carry cooling water to and from the power station when it becomes operational. Part of the wider Balfour Beatty HPC Marine team, the SCL team play and integral role which regularly goes unsung.

The Balfour Beatty team have worked in collaboration throughout with EDF, Tommy Gallagher Tunnelling (TGT), AECOM, Kier Bam and many other close stakeholders to

ensure these were the great success they have proven to be.

Tommy Gallagher, Director of TGT, said: “Very well done to all the team at Hinkley Point C involved in the completion of the SCL tunnelling works on site. The work was completed in a very timely fashion while maintaining high health and safety and quality standards.

“This achievement is even more remarkable when taking into consideration the difficult ground conditions faced, the weather conditions and obviously the amazing professionalism shown by all the team who continued to work productively during Covid-19 pandemic. A fantastic collaboration of effort by Balfour Beatty who worked tirelessly to keep the site open, NNB and TGT with a special thank you to Russel Henderson. Very well done and congratulations to all involved!”

The team and its operation were expertly led by Richard Durham, Balfour Beatty SCL Agent for HPC Marine Works. The hard work and dedication of all operatives; stacking up close to 1.6 million personnel hours over 1,625 shifts is how these excavations could be completed on time and safely.

Not only that, the team also learnt lessons when they completed duplicate work from unit one to unit two. Huge congratulations to the whole team on this important milestone for the whole HPC project. Take a look at this film to see a selection of photos taken throughout the SCL works.

Watch this photo montage film to see the highlights from the works across the Hinkley Marine SCL works.