At the end of February, Unit 1’s first low pressure (LP) rotor was successfully tested in GE’s factory in Belfort, France. The LP rotors form a critical part of the low pressure steam turbines, which are key components of the power production equipment in the turbine hall. The eight-metres wide rotor rotated at a speed of 1,500 revolutions per minute, similar to future site conditions. Each reactor will have three LP turbines. The rotors will be delivered to HPC later this year.

The remaining eight of the 15 steel turbine group (TG) columns in Unit 1’s turbine hall have now been installed. The 15 TG columns will form the base for a concrete table, which will hold the world’s biggest steam turbine.

In February, Bylor started excavations and installed two tower cranes to kick-off construction of HPC’s Operational Services Centre. Located at the centre of Site, between the two turbine halls, the building will act as the primary service centre for more than 650 people when HPC is operational. The teams who will use the centre will be responsible for managing the daily operation of both of HPC’s EPR units. 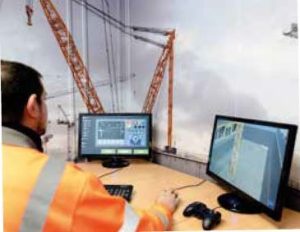 Bylor crane operators have been honing their skills in extreme weather conditions without setting foot outside, thanks to a new training simulator. Installed in November 2020 at the training school near South Plaza, the simulator is playing an important part in Bylor’s training and competency assessment plan for HPC lifting team members. Operatives, slinger signallers and crane are being put through realistic scenarios and tested to the limits in high winds and poor visibility – all from the safety of the simulator driving seat, using controls that replicate the real thing.

Taken from The Point March 2021