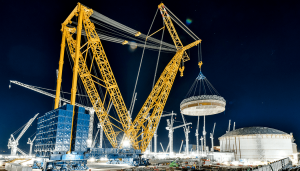 Big Carl lifts the cup
Construction of the second reactor at Hinkley Point C passed a major milestone with the lifting of the first part of the massive steel containment liner cup. Lifted by the world’s largest crane Big Carl, just nine months after the same lift for the first reactor, construction of the 170-tonne “liner cup” was 30% quicker than the identical part on Unit 1.
The liner cup is the base for the reactor’s steel containment which is being prefabricated in five parts and lifted into place by the Sarens giant crane, Big Carl. This innovation means welding can take place in covered bunkers protected from weather, helping to improve quality and efficiency. This is a learning from the construction of other EPR projects around the world. The liner cup for Hinkley Point C’s second unit was built in 39 days versus 57 for the first. The construction and lift were completed on schedule, despite workers having to adapt to Coronavirus working conditions.
The cup is one of more than 500 prefabricated steel and concrete elements that Big Carl will lift, including whole sections of buildings, walls and pre-cast air ducts. The heaviest items weigh in at 1,600 tonnes.

Team completes final breakthrough
The sprayed concrete lining team completed its final tunnel breakthrough, bringing to an end more than 600 metres of safe, onshore tunnelling.
The team used more than 9,000m3 of sprayed concrete and excavated 40,000m3 of earth before reaching its conclusion of the longest onshore tunnel in the second outfall gallery.
The team’s work began in 2018 and has seen it complete three launch areas for the tunnel boring machines, five onshore tunnels to transport water to and from the power station and three shafts.
Richard Durham, Balfour Beatty SCL Agent for HPC Marine Works, said: “There’s a lot of complexity in doing this number of smaller tunnels. We’re proud of what we’ve achieved.”

Gallery takes shape
Good progress is being made on the surface preparation works for the Emergency Diesel Generator (EDG) main fuel tanks. A team is stripping and re-coating the four tanks, which each weighs 61 tonnes. The tanks are then grit blasted and coated to ensure they are protected from corrosion over the course of their life.
Excellent progress is also being made on the HGE Gallery which runs between the Raw Water Storage building and Unit 1 and Unit 2, providing the emergency water cooling system.

Taken from The Point October 2020